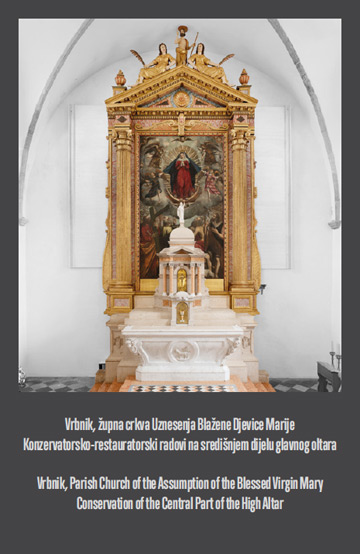 The polychromed, gilded and carved high altar of the Assumption of the Blessed Virgin Mary (719 x 775 x 60 cm) comprises of the central part of Venetian provenance from late 16th and early 17th century, and lateral two-tiered wings, possibly made in a local workshop in mid-17th century.

The inscriptions on the Last Supper painting, which once stood below the altarpiece, mention the acquisition of the retable in Venice in 1599 through Marin Cvitović, the bishop’s vice chancellor and a layman of Kotor, but it is not entirely certain they refer to that retable. The altar was consecrated in 1600, and gilded in 1601 and 1652, as evidenced by the inscription on the pedestal of the left pillar of the predella discovered during the removal of the overpaint in 2015. The central part of the altar is tectonically designed in the form of a classic aedicula with Corinthian columns and a triangular gable. It was made in an excellent late Renaissance and Mannerism Venetian workshop that was strongly influenced by Sebastiano Serlio’s treatise on architecture. Its sculptural decoration and ornaments are inherent to the Renaissance and Mannerism vocabulary, unlike the lateral wings, which, despite their successful incorporation into the unity of the altar, formally and structurally differ from the central part due to typical Baroque vine ornaments, along with cartilage and algae motifs. The rich iconographic decoration of the altar consists of thirteen freestanding sculptures arranged around the altarpiece of the Assumption of the Blessed Vrbnik, Parish Church of the Assumption of the Blessed Virgin Mary Conservation of the Central Part of the High Altar Virgin Mary with angels and saints. The altarpiece is the work of an unknown painter, reminiscent of the17th-century Venetian painting.

Conservation began in 2012 at the Rijeka Department for Conservation of the Croatian Conservation Institute. It was performed in phases due to the complex construction and dimensions of the altar. When the altar was being disassembled, elongated volutes were discovered on the sides of the columns. Lateral wings were attached to the volutes that are similar to a shallow cartouche above the altarpiece, and they harmoniously form the entire altar irrefutably proving an earlier date of the central part. Research has shown that the central part of the altar was completely gilded with poliment gilding on two occasions, and partially re-painted on three occasions. The most recent layer of overpaint was carried out with multi-coloured contouring and marbling. The extremely weakened wooden carrier, along with the entire altar, was completely disinfected and consolidated, and the work continued on the central part. Stabilization of the completely separated, disintegrated and elevated areas of the painted layer that were attached to the surface only with the recent altered glaze, which was then removed along with the second and third overpaint from the bases of columns, predella and sculptures, was a particular challenge. This was followed by carpentry repairs, reconstruction of damaged areas and carving missing elements of the carrier, reconstruction of the chalk base, retouching, reconstruction of the gilding and glazing the overpaint, thus completing the visual integrity of the altar.

Conservation of this remarkable work of art will continue on the lateral wings. After the work on the entire altar has been completed, this extraordinary liturgical, traditional and cultural objet d’art will be returned to the local community that co-financed the restoration project together with the Ministry of Culture of the Republic of Croatia and the Krk Diocese.