Kloštar Ivanić, Parish Church of the Assumption of the Blessed Virgin Mary / Three Altars and Baptistery 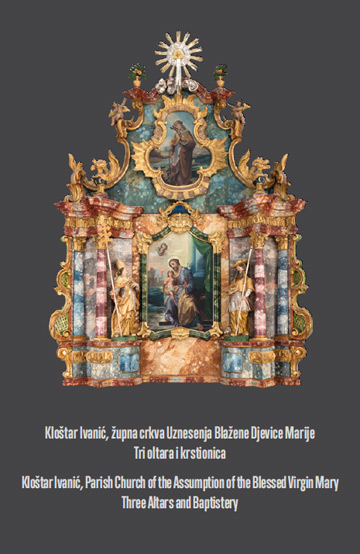 The international project Tracing the Art of the Straub Family (www.trars.eu) studied the heritage of the Straub family of sculptors. Croatian Conservation Institute (project leader), Bavarian State Department of Monuments and Sites, Institute for the Protection of Cultural Heritage of Slovenia, and Universities of Ljubljana and Graz participated in its implementation together with associate researchers from other heritage, religious, scientific and educational institutions. The project was co-funded by the Creative Europe Programme of the European Union.

Church of the Assumption of the Blessed Virgin Mary in Kloštar Ivanić was renovated in 1759, and fully furnished by 1763. It was consecrated on September 4, 1763 by Stjepan Pucz, Bishop of Belgrade and Grand Provost of Zagreb Cathedral, in the presence of Francis Thauszy, Bishop of Zagreb. Bishop Thauszy was the biggest donor for the reconstruction, and he also commissioned the magnificent high altar with his coat of arms in the rocaille-framed cartouche above the altarpiece. Spatial dynamics was achieved by elevating the pillars to a height above the entablature level and the masterfully created gloriola of the Holy Spirit made out of several layers.

The votive painting of the Assumption of the Blessed Virgin Mary on the high altar, by an unknown master, dates back to 1644, and was taken from the old altar. The original paintings from the altar of St. George have been preserved, while the original altarpiece on the altar of St. Joseph was replaced in 1862 with a new one, commissioned in Graz from the painter Johann Beyer.

The old parish chronicle mentions renovations of the altars and masters who carried them out: Karlo Haman, Gašper Milavc, Marco Antonini and Petar Rutar. According to the usual practice at that time, all renovations included a partial or, more often, complete repainting with different techniques and colours than the original.

Croatian Conservation Institute restored the altars between 1993 and 2006, while a private workshop restored the baptistery in 1991. During the conservation, the original 18th-century polychromy was discovered and presented. It is characterized by bright colours and shimmering surfaces gilded with gold or silver, and, in some places, there is especially luxurious marbling executed with glossy glazing over silver which shines under semi-translucent coats of paint, as well as a special Baroque technique of imitating silk by subtly merging two complementary colours.