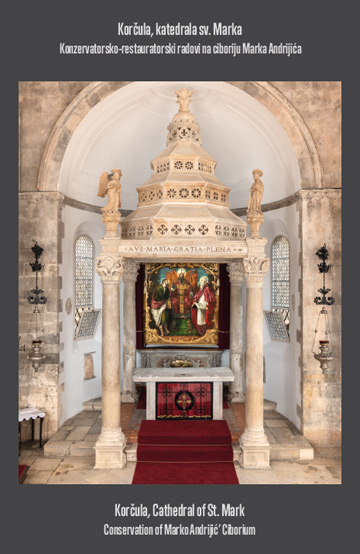 The cathedral of St. Mark is located within the walls of the town of Korčula, made out of stone extracted from nearby quarries (petrali) and built over several centuries through architectural knowledge and stonemasons’ skills of many masters – “…several stone-carving generations worked and each left signs of their time. The first generations gave, at the beginning of the 15th century, when Romanesque traditions were still present, Romanesque strength and stability in construction, the second generation in mid-15th century adorned it with stone decor, which was solid and mathematically calculated at the base of the building, and flamboyant and free at the top. The third generation with Andrijević at the helm, at the end of the 15th century, brought purity of a new style – Renaissance, to the cathedral, and the fifth generation could only bring the exuberance of Baroque into the cathedral during repairs, but only in detail.” (C. Fisković) In 1300, the church of St. Mark became the seat of the newly established Korčula-Ston Diocese, but little is known about its appearance before 1406. It took several decades to build the new church building, and it was not consecrated until 1556. During this time, the most prominent among the masters were Bonino da Milano, Jacopo Correr and Marko Andrijić, who became protomagister of all public works in Korčula in 1485.

In 1486, in addition to other works in the cathedral, M. Andrijić committed to build a ciborium for 115 ducats. The Apulian-Dalmatian type of ciborium (built using only stone from Vrnik) consists of four slender columns that carry an octagonal roof with several storeys that narrow towards the top, and turns into a hollowed tholobate with a spherical dome. In addition to innovations in the constructive solution of a combination of two proportional systems, Andrijić’s work is also recognizable for its stone decor: from the first pillars with entasis in our Renaissance art, to the dolphin capitals, which became the trademark of Andrijić’s bottega.

A series of renovations were carried out on the cathedral at the end of the 18th century, during Bishop Josip Kosirić, changing its original appearance. Work was also carried out on the ciborium. The last, fourth storey was removed, and instead, four stone slabs carved in the shape of a three-sided leaf were installed. The slabs were connected at the top on which the original acroterium was placed. This intervention degraded Andrijić’s masterful work. For a time, the original crown was used as a baptismal font in the chapel of St. Roch until it was deposited in the lapidarium of the Bishop’s Treasury.

In 2014, employees of the Split Department for Conservation, Croatian Conservation Institute, conducted laboratory analyses and cleaning tests, and a drawing of the current condition of the ciborium was made. In 2015, the removal of impurities and cement joint reinforcement began. Only after this phase was finished did it become possible to review the condition of the structure. When structural engineers examined the ciborium, and with the consent of conservators (Conservation Department in Dubrovnik), it was agreed to remove the upper, unstable part of the ciborium and transport it to the Institute’s workshop in Split. An interdisciplinary team of experts examined all the information that suggested the sequence and consequences of historical interventions, and the reasons for the impaired structural stability. After a thorough cleaning of the joints and profiling of the elements, when restorers tried to put them back together and analysed traces of the masonry tools, it was noticed that the ciborium was significantly re-carved even during the assembly in the 15th century. Archival documents were analysed at the same time, and the reconstruction of the original proportions of the ciborium began.

All new information pointed to the necessary renovation of the damaged stone elements and the reconstruction of the original appearance of the ciborium. Therefore, eight new elements of the missing roof and dome were constructed. Traditional tools, techniques and methods were used for processing and assembly of various parts, using all the preserved elements respecting professional practice. Furthermore, during in situ mounting, the height of each level was minimally corrected to ultimately achieve its original geometry.

On this occasion, “the sign of our time” was left by a generation of restorers, reviving the original master’s project by restoring the removed crown and evoking the skill of old masters, reconstructing long-lost elements made and assembled as they did centuries ago, carving stone with rhythmic beats of martelina, tajenta and lito tools, returning the ciborium to a place that is worthy of it - at the very top of early Renaissance art in Dalmatia.