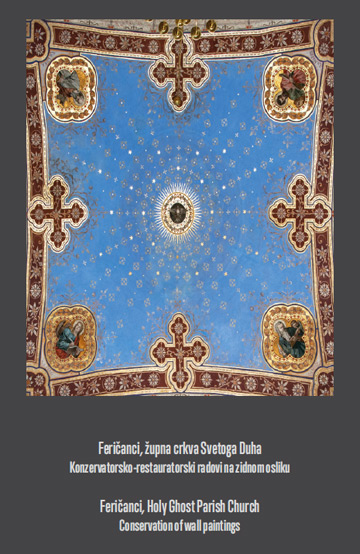 The parish church in Feričanci is a one-nave structure with a somewhat narrow, polygonally enclosed sanctuary with a rectangular sacristy on the west side. The narthex, with a dome, is highlighted by two massive pillars that support the structure of the choir. The nave is divided by three pairs of twin pilasters with high pedestals, bases, capitals and a cornice. The nave has a compressed trought vault and it is divided into bays with flanges. The sanctuary, that has a domed vault, is separated from the nave with a triumphal arch. The nave and sanctuary are illuminated by pairs of segmentally closed windows. The bell tower rises above the main façade, which is highlighted by a portal, pair of Tuscan pilasters, gable and attic with decorative vases. Lateral façades have a simple design with symmetrically shaped panels that alternate with pairs of windows.

Over the course of two centuries, the church survived several earthquakes, and the damage caused by the earthquakes was repaired after each one. The last renovation was carried out between 1907 and 1909 when the prerequisites for painting the church were created. In 1908, pastor Nikola Mikić personally selected and hired Rikard Rojnik, an accomplished painter, who painted the entire interior of the church with figurative depictions and lavish ornamentation. The composition of the wall paintings, made with a combination of glue and oil techniques, is adapted to the formats of architectural elements, wall surfaces and vaulted fields.

The walls of the nave and sanctuary of the church are filled with various Christian symbols of flowers and leaves (lily, forget-me-not, edelweiss, passion flower, oak and laurel leaves, etc.). The vault of the nave is divided with gilded and ornamented flanges into three bays. The first and third bays have two smaller paintings with themes from the New Testament: Jesus and the children, Three Marys at the Tomb, Jesus and the Samaritan Woman, and Escape to Egypt. The painting of Jesus preaching from a boat to people on the shore dominates the central bay. The vault also features Agnus Dei and a pelican, as well as coats of arms of Croatia, Dalmatia, Slavonia and Bosnia, and symbols of the Passion of Christ in separate fields. The walls of the sanctuary are filled with painted draperies, while the vault is painted blue with rows of gold stars. There is a symbolic representation of the Holy Spirit in the centre, and medallions depicting the four evangelists on a gilded mosaic-like surface in the corners with four crosses with trefoiled ends between them. All the walls of the apse are painted with fringed ornate draperies and rectangular fields with passion flowers (Passiflora incarnata) above them, symbol of the Passion of Christ. The starry sky with the monogram of Christ with golden rays and a series of stars and flowers is painted in the apse dome. The Heart of Jesus and the Heart of Mary are depicted in the lower part.

Conservation of all wall paintings in the interior of the church was carried out from 2001 to 2019. The work was preceded by a thorough study of archival and historical documents, as well as laboratory testing and choosing the appropriate work methodology. The probes confirmed older painted layers on the vault of the sanctuary and the remains of the choir wall with corresponding pillars. Wall paintings in the sanctuary and the nave were cleaned and consolidated, cracks were repaired, and reconstruction, retouching and gilding were carried out.

When the conservation in the parish church of the Holy Ghost was finished, the renovation was finally complete and extremely lavish wall paintings were presented restoring the splendour from the beginning of the 20th century.