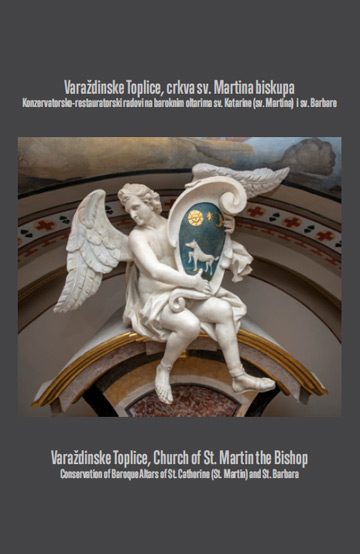 Church of St. Martin, a single-nave, longitudinal structure, was built in the 15th century, in the same location as the previous church. In the 18th century, the bell tower was added, the church was completely restored and given a Baroque appearance.

After the devastating earthquake in 1880, Zagreb Cathedral of the Assumption of the Blessed Virgin Mary and St. Stephen and Saint Ladislaus was renovated and, in 1882, marble altars of St. Barbara and St. Catherine from the Cathedral were donated to the parish church in Varaždinske Toplice. The altars are among the highest quality artworks from the Baroque period in northern Croatia, and they are the work of the exceptional Italian sculptor Francesco Robba (1698-1757). In 1885, shortly after the altars were donated, wall paintings with evangelists, Slavic saints Cyril and Methodius, and scenes from Jesus’ life were painted in the church by Marko Antonini.

The altar of St. Catherine (high altar dedicated to St. Martin) used to be located in the north part of the nave of the Zagreb Cathedral, and the altar of St. Barbara (side altar on the north side of the church in Varaždinske Toplice) was across from it in the south aisle of the Cathedral. Both altars have the same compositions, but the attic, central relief on the retable and the layout of the saint sculptures differ. Architectural and decorative relief elements of the two altars were made using different types of marble (i.e. flat backgrounds of reliefs were made out of yellow Verona marble, profiled frames and vegetative reliefs out of white marble, antependium centres and column shafts out of African marble, pilasters out of red marble from France, cornice profiles and volutes out of marble from Kranj, and stipes bases and altar stones out of black marble). Carrara marble was used for the sculptures of saints and angels, and reliefs portraying the saints’ martyrdom. Wooden sculpture of St. Martin was later placed in the central zone of the altar attic of St. Catherine, and the plaster sculpture of St. Nicholas Tavelic in the attic of the altar of St. Barbara.

Department for Stone Sculpture of the Croatian Conservation Institute carried out extensive conservation on Robba’s altars. Sculptures from both altars were examined in 2014, and extensive damage was observed. The altars were first disassembled, and all the parts that could endanger human lives were catalogued. The extensive process of restoring the altars began in 2015 with conservation and restoration research (laboratory analyses, art-historical and archival research, architectural drawings of the condition before conservation, probing, photo documentation, mapping damage and contamination etc.). Preliminary work (e.g. cleaning test) was also carried out during the first phase. It was followed by different methods for cleaning stone, extraction or stabilization of harmful water-soluble salts, connecting detached parts, reconstructing missing parts, conserving metal elements, restoring the gilded layer, tonal adjustment and retouching of marbled parts, and protection with chemical agents.

In 2018, conservation on the altars of St. Catherine (St. Martin) and St. Barbara was completed, thus preserving the outstanding opus of Baroque sculptor Francesco Robba, and contributing to a better valorisation of the important corpus of Croatian sculpture from the 18th century.