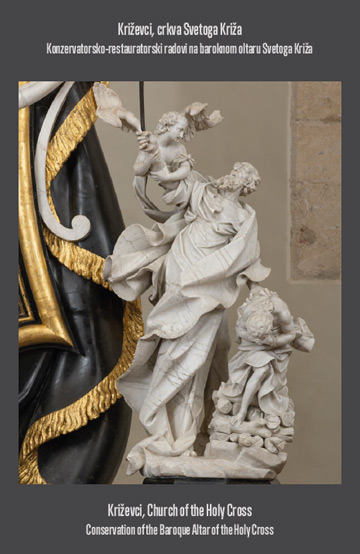 The most important Baroque feature – stone altar of the Holy Cross, the last and one of the finest pieces by the Italian sculptor Francesco Robba (1698-1757) – is located in the church sanctuary. The altar was built in 1756 for the Cathedral of the Assumption of the Blessed Virgin Mary and Sts. Stephen and Ladislaus in Zagreb. During the renovation of the cathedral, after it was damaged in the 1880 earthquake, the altar was moved to the Church of the Holy Cross in Križevci.

The atectonic altar, whose comparative examples date from the end of the first and second half of the 18th century and can be found in Central Europe and some parts of northern Italy or Slovenia, was made using several types of marble. The central part of the retable is dominated by the Christ Crucified painting. Sculptural groups Moses and the brass serpent and Abraham sacrifices Isaac are located on the left and right side of the stipes on side pedestals, while the antependium is decorated with the Souls in Purgatory relief.

Conservation of the altar of the Holy Cross began in 2016 on the initiative of Rev. Stjepan Soviček, parish priest of the St. Anne parish in Križevci, Conservation Department in Bjelovar (Ministry of Culture of the Republic of Croatia) and Croatian Conservation Institute. The work included conservation research (archival and art historical research, laboratory analyses, photo documentation and architectural drawings of the condition before conservation, development of graphic documentation, i.e. mapping of damage and dirt, etc.), as well as conservation of stone sculptures (static repair of displaced or cracked stone elements of the altar, mechanical cleaning, cleaning with distilled water, steam and chemical cleaning, reconstruction of missing elements, tonal adjustment of reconstructed parts, restoration of gilding, etc.). During the work, suppedaneum and tabernacle of the altar were dismantled and transported to a workshop of the Croatian Conservation Institute in order to carry out the process of extraction or stabilization of harmful water-soluble salts on stone elements, and to continue the cleaning, reconstruction and assembly. Afterwards, they were returned to their original places on the altar of the Holy Cross. During the entire conservation process, work was carried out on metal (tabernacle door) and wooden parts of the altar (pelican sculpture on top of the altar).

The conservation of the altar of the Holy Cross was completed in 2019, presenting this majestic example of Baroque sculpture and masonry at its finest.