Conservation-Restoration of Wall Paintings in the Hvar Theatre 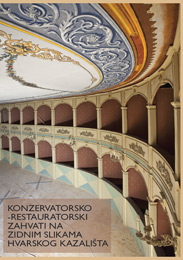 An exhibition was mounted to mark the 400 years of Hvar theatre and the completion of conservation-restoration work on its wall paintings.

to be founded in early modern Europe, following the famous Palladio's Teatro Olimpico, established in 1580 and Scamozzi's theatre in Sabbioneta, a few years later. The theatre was built as part of the Arsenal, with a sign indicating 1611-1612 as the year of its completion. However, the idea to set up a theatre, and the beginning of its construction are of a much earlier date. The exterior has almost entirely preserved its original outlook, but the original interior is unknown to us due to multiple building adaptations.

During the 19th century the ceiling was painted to be used as stage decoration. These decorative paintings were restored several times during the 19th and 20th centuries. The latest conservation-restoration dates to 1988, when an even earlier composition, depicting an idealized landscape, was uncovered underneath the visible layer. Conservators decided to present this newly discovered layer, while the subsequent layer was removed from the wall using the strapping technique, and later exhibited in the Hvar Heritage Museum. 20 years on, the deteriorating condition of the wall paintings called for another conservation-restoration intervention which included a number of different procedures and techniques such as: the elimination of moisture and damaging salts, the rehabilitation of plaster, injection, impregnation, consolidation of the coat paint, its cleaning and protection. Croatian Conservation Institute, Section for Wall Painting, Mosaics and Stucco in Split carried out all the work.