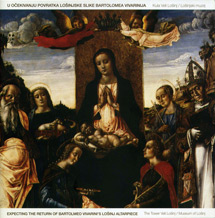 Bartolomeo Vivarini's Renaissance altarpiece depicting the scene of Sacra Conversazione was painted in 1475. It is a significant painting in the context of Venetian Quatrocento. Although not part of its original inventory, the painting now embellishes the church of St. Anthony the Abbot in Veli Lošinj: it has been there for almost two centuries, having been left to the town by a Venetian merchant and patron.

The Vivarini altarpiece depicts the Virgin and Child Enthroned with saints and angels, surrounded by an open air landscape. The Venetian commune, renowned for its traditionalism and slow acceptance of new artistic solutions preserved the Late Gothic form of altar polyptych until late into the 15th century. Vivarini's painting therefore highlights the acceptance of this new type of altarpiece composition, which would become typical of the Renaissance.

Ever since its arrival to the Lošinj church in 1838, the altarpiece has been endangered due to inadequate microclimate conditions and had to undergo numerous conservation treatments. The painting was brought to the Croatian Conservation Institute in 1999 for its forth conservation-restoration. This very complex and demanding task was carried out by a team of experts who received the Vicko Andrić award for excellent achievement in the field of cultural heritage protection in 2002.

An exhibition was mounted while expecting the return of Vivarini’s altarpiece to Veli Lošinj. It was organized by the Croatian Conservation Institute and the Lošinj Museum and presented the altarpiece in the context of Venetian Quatrocento painting, featuring the art-historical research and the conservation-restoration work carried out on the painting.