Josipovac Punitovački – Veliko polje I. Rescue Archaeological Excavations on the Route of the Highway A5 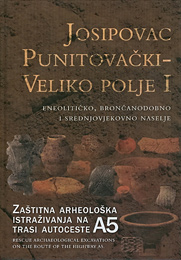 Croatian Conservation Institute, Department for Archaeology carried out the archaeological research in Josipovac Punitovački–Veliko polje I in 2007 and 2008. The site is part of the C5 corridor of the Osijek–Đakovo motorway, and the results are presented in this monograph.

The survey of the rich findings revealed traces of an Eneolithic (Retz-Gajary and Baden culture), a Bronze Age (Vinkovci and Belegiš culture) and a medieval settlement.

Archaeological surveys and excavations presented in this monograph are accompanied by presentations of conservation-restoration of the finds. Some interesting experiments in conservation are highlighted, along with results of the examination of stone artefacts and animal bones.