The Four Evangelists in the Œuvre of Mattia Preti 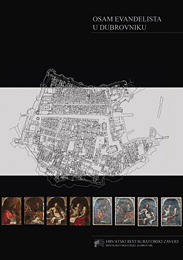 This richly illustrated edition summarizes the conclusions of an international symposium held in Dubrovnik in 2008. The symposium focused on the comparative analysis of four ensembles depicting the Evangelists from the œuvre of Mattia Preti. Two of these ensembles are now in Dubrovnik, one is in Cosenza (Italy) and one is in Sliema (Malta).

Croatian Conservation Institute carried out the conservation-restoration work on the two ensembles from Our Lady of Carmel and St. Blaise’s Church in Dubrovnik. This included a comparative analysis of the ensembles, stratigraphic analysis and a research into the art historical and historical context.

The symposium proceedings were published bilingually, in original language and translated into Croatian and English.