Iznik – Ottoman Pottery from the Depths of the Adriatic 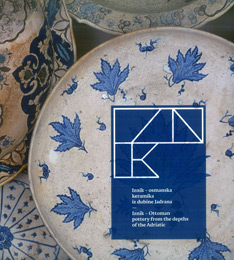 The bilingual catalogue was published to accompany the exhibition of the same name held at the Mimara Museum (May 18th – Sep 13th, 2015) and the Ethnographic Museum in Dubrovnik (Jul 15th – Sep 30th, 2016). The exhibition raised much interest among both the general and international professional public, presenting valuable archaeological material from a merchant ship that sank in the late 16th century in the Sveti Pavao shallows, off the island of Mljet. Since 2007, the Department for Underwater Archaeology of the Croatian Conservation Institute has conducted research financed by the Ministry of Culture. In 2010, Croatian archaeologists were joined by a team of colleagues from the Ca’ Foscari University of Venice who took part in the underwater research until 2012. All the finds were restored in the Croatian Conservation Institute.

The ship, whose journey ended in the Sveti Pavao shallows, was transporting oriental merchandise intended for the European market. The most numerous and best preserved pieces of cargo from the merchantman are the ceramic items, manufactured in the Ottoman town of Iznik. The highly appreciated Iznik production reached its peak in the supreme workmanship and decoration of ceramic ware during the reign of Suleiman the Magnificent, having maintained its quality into the reigns of his successors Selim II and Murad III. The Iznik pottery become popular at this time in Europe and was shipped as luxury goods to major market centres like Dubrovnik or Venice. Along with the Iznik ceramic cargo, the exhibition presented results of six campaigns of underwater archaeological research of the shipwreck. Other recovered artefacts, such as bronze cannons, glass, metal and ceramic ware, coins and ship gear were also on display, along with personal possessions of the crew that best illustrate the life on a Venetian merchant ship. Objects found inside a closed archaeological unit such as the shipwreck in the Sveti Pavao shallows hold extraordinary value for the dating of Iznik ceramic production. They excellently illustrate economic circumstances of the period and are a first-rate example of the trade between the East and West in the second half of the 16th century.