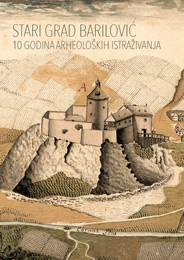 This publication presents the results of years of archaeological research of the late medieval Castle of Barilović. By interpreting the movable finds and relations of architectural structures, valuable information was obtained for the reconstruction of the building phases and life in the castle. Barilović Castle was until recently thought to be an example of a 16th-century Military Frontier fortress. Research along with the protection efforts that the Croatian Conservation Institute has undertaken since 1998 revealed, however, that the castle was built sometime in the mid-15th century. Three phases of life in the castle could be identified according to its functions – the feudal fortress (15th–16th c.), the military fortress (16th–18th c.) and the town under civil administration (from 1871). In addition, based on the results of archaeological research, Barilović Castle was for the first time inscribed onto the map of prehistorical sites. Two horizons of settlement have been observed: an Eneolithic one (Lasinja Culture) and a Late Bronze Age one.

Barilović Castle was definitely abandoned after an allied bombing in the Second World War. After that it served as a dumping ground, with occasional clean-up efforts launched be the Barilović Municipality. Architectural remains of the castle have after the Second World War seen rapid degradation, which was halted only by the intervention of the Barilović Municipality and the Ministry of Culture, with the Croatian Conservation Institute joining in for the renovation and research. Archaeological explorations and conservation of the Barilović Castle are still under way.