Wall Paintings in the City of Dubrovnik 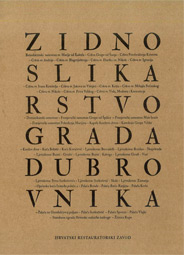 Wall Paintings in the City of Dubrovnik resulted from years of efforts by the Croatian Conservation Institute’s employees and their associates in researching and renovating monuments in the Dubrovnik region, which included a programme of cataloguing wall paintings that has been conducted since 2011 with the support of the City of Dubrovnik.

The publication provides for the first time a systematic overview of the wall paintings that originated in and around Dubrovnik from the Middle Ages to the late 19th century. In the simple and easily accessible format of catalogue items all important information is summarised, with descriptions given of the wall paintings from 44 heritage buildings in Dubrovnik (houses, palaces, villas, churches and monasteries). The results of research reveal a stylistic, chronological and qualitative diversity of the wall paintings, as well as their presence in a great number of Dubrovnik buildings.

Other than to inform the professional and general public, the catalogue is also an attempt to raise awareness among the buildings’ owners about the importance of protecting these endangered works of art.

The catalogue’s editor is Veronika Šulić, conservator-restorer at the Dubrovnik branch of the Department for Wall Paintings and Mosaics of the Croatian Conservation Institute, with photographs by Katarina Gavrilica and graphic design by Branimir Kolarek.