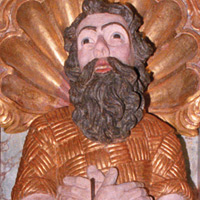 To mark the 20th anniversary of the Ludbreg Conservation Centre, which was celebrated on December 5th, 2014 at Batthyány Mansion, the Croatian Conservation Institute published a brochure about the Centre’s foundation and efforts in protecting Croatian cultural heritage.

From a “wartime hospital for artworks” to the Conservation Centre

After Croatia was invaded, emergency evacuations were often resorted to as a way to rescue cultural and artistic heritage from wartime destruction. As part of the Programme to evacuate the war-endangered heritage, fifteen secret depots for artefacts were organized in continental Croatia. It was Batthyány Mansion in Ludbreg that could provide basic conditions for the safekeeping of evacuated artefacts, given its spatial capacities and a good state of preservation.

As early as 1991, replies began to arrive to numerous calls to the international public for the Croatian cultural heritage to be rescued from degradation and destruction. In 1992, an agreement was signed whereby the Town of Ludbreg handed over Batthyány Mansion to the then Ministry of Education, Culture and Sports, to be used free of charge for the purpose of protecting cultural heritage. The project to establish the Centre was initiated by Croatian conservators, with exceptional appreciation and support of the Town of Ludbreg and the backing and professional cooperation of Bavarian conservators. It was approved by the ministries of culture and finance and the Croatian Government, and encompassed by the budget.

The Ludbreg Conservation Centre of the Croatian Conservation Institute began in 1994 its work on the restoration of artefacts injured in the War of Independence. Croatian experts, were joined in the workshop by international certified conservators, their associates and students and other experts in the field of conservation. The Centre’s activity was expanded after Batthyány Mansion was fully renovated in 2000 through a loan from the Bavarian State Bank. Nowadays, it employs 16 people working as part of the Croatian Conservation Institute, the head institution for art conservation in Croatia.

Over the last 20 years, the Croatian Conservation Institute has through its Centre in Ludbreg given an exceptional contribution to the development of conservation and restoration in Croatia, due largely to the conservation of numerous artefacts from the war-stricken areas as well as from northeast Croatia, and by being a venue for relevant education programmes. By renovating Batthyány Mansion, a fine monument of culture was rescued for the County and the Town of Ludbreg, which proved to be an exceptional contribution to the development of the town and the region into cultural and tourist attractions.

Programme to mark the anniversary

The programme to mark the anniversary took place throughout December 5th, 2014 and included lectures and presentations by participants and organizers on how the project of the “wartime hospital for artworks” had originated and evolved. An exhibition of posters showing restored artefacts was presented, as well as an accompanying catalogue. A memorial plaque was uncovered and certificates of appreciation presented to the most-deserving organizations and individuals from Croatia and abroad. Throughout the day, the conservation workshops were open for visitors to see the work on artefacts from the Varaždin County and talk to the conservators, as well as view a poster exhibition of restored liturgical vestments from the collection in the Holy Cross Chapel.