Ludbreg, Church of the Most Holy Trinity, Pulpit

During the European Year of Cultural Heritage, completed conservation and restoration of the pulpit from the Church of the Most Holy Trinity in Ludbreg will be presented. 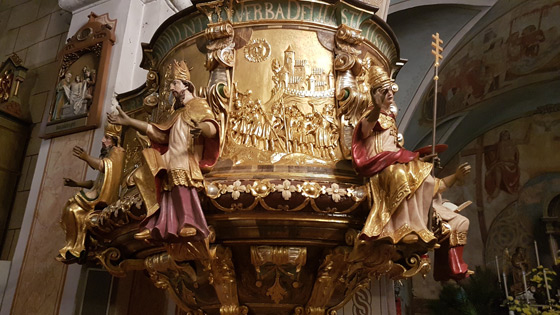 The pulpit from the Parish Church of the Most Holy Trinity in Ludbreg is one of the most valuable cultural monuments in the Ludbreg area. It dates back to around 1750 and is one of the most significant achievements of sculptor Stjepan Severin from Križevci, who worked in mid-18th century in Podravina, from Ludbreg to Virovitica and Čazma. His style is characterized by rich imagination with a wide variety of decorative ornaments and an array of distinctive and recognizable types of saints characteristic of his work. The original polychrome on the pulpit was made using a technique that imitates the texture of wood by painting, while the sculptures, reliefs and decorative elements are gilded, silvered and colored with varnishes.

The pulpit had several layers of paint and it was damaged because of the passage of time and improper repairs, and parts of the construction were dilapidated.