During the European Year of Cultural Heritage, results of archaeological research and documentation of the existing condition of Cesargrad Castle will be presented. 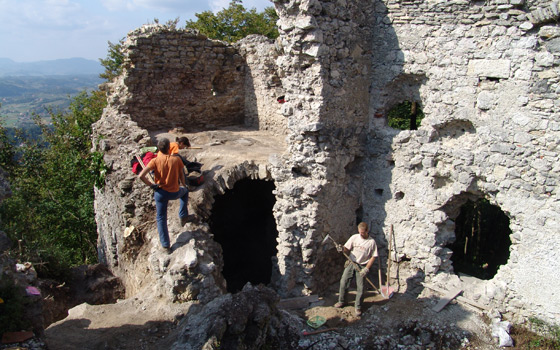 The remains of Cesargrad Castle are located on the west side of Cesargrad Hill, above the narrow ravine of the Sutla River, northwest of Klanjec. The well-fortified castle core was located here, and the valley was surrounded by a trench on the east side. The entire castle was once surrounded by a defensive wall reinforced by towers on the exposed sections.

Archaeological research in 2008 and 2010 confirmed the potential of Cesargrad, and documentation of the existing condition could begin. By analyzing architecture and archaeological finds, the position of one of Cesargrad’s kitchens was determined in the western tower. The existence of storage rooms on the ground floor of the south wing, and residential ones on the upper floors, was also established.

The work carried out this year, funded by the Ministry of Culture of the Republic of Croatia and implemented with the support of the Conservation Department in Krapina, the Klanjec branch of Matica hrvatska and the Town of Klanjec, is the beginning of systematic renovations of one of the largest medieval castles in Croatia. It is a valuable contribution to the corpus of Croatian medieval architectural heritage because it had a central position in the events of the Croatian-Slovene Peasant Revolt in 1573, the 450th anniversary of which will be in 2023. Therefore, it is time for the fragile, but powerful remains of Cesargrad Castle to be saved from the ruthless passage of time.