During the European Year of Cultural Heritage, Croatian Conservation Institute presents the results of the conservation and restoration research of the Sorkočević Summerhouse, its wall paintings and stone inventory. The work was carried out as part of the "Skala - A New Cultural Tourism Destination in Komolac" project funded by the European Regional Development Fund. 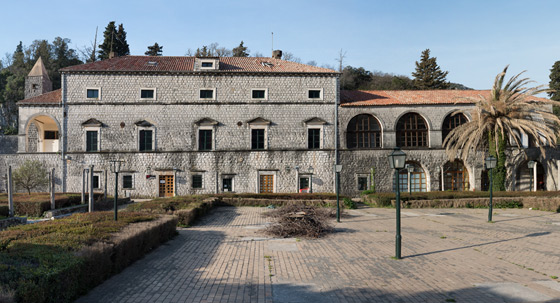 The culture of Dubrovnik country estates has long been recognized as a characteristic of Renaissance humanism of a small but powerful Republic of Ragusa. Historical circumstances, neglect and abandonment have caused the destruction of many estates in the countryside, and the Sorkočević complex on the bank of the Ombla River is no exception. The basic corpus of the summerhouse was created over the centuries, and the main façade has characteristics of high Renaissance. Especially valuable are the architectural elements - a large loggia with allegorical Baroque paintings, an octagonal bathroom, created as an expression of the revival of ancient ideals, and the lavish staircase (skala), which connected the summerhouse to the river. The Mannerism fountain depicting Triton is located in the garden.

As part of the project, Croatian Conservation Institute carried out interdisciplinary research of the Sorkočević complex. The results were presented in the conservation study with a presentation proposal. In addition to the revised survey of the wall paintings, a catalog of the entire stone inventory from the summerhouse and the gardens, with a conservation proposal, was created. The entire conservation documentation will be used as documentation for the project of the reconstruction of the complex which is now part of ACI Marina Dubrovnik. Through this project, the summerhouse and its immediate vicinity would get a new purpose and get back the lost value of a large part of the estate. Through proper restoration of the most valuable parts of the complex, the original elements of the culture of countryside life in Dubrovnik would be presented, which would ultimately enrich not only the local tourist offer but also Croatian cultural heritage.