Šipan, Church of St. Mary, Polyptych of the Assumption of the Virgin Mary

During the European Year of Cultural Heritage, the completed conservation and restoration of the polyptych of the Assumption of the Virgin Mary from the Church of St. Mary on the island of Šipan will be presented. 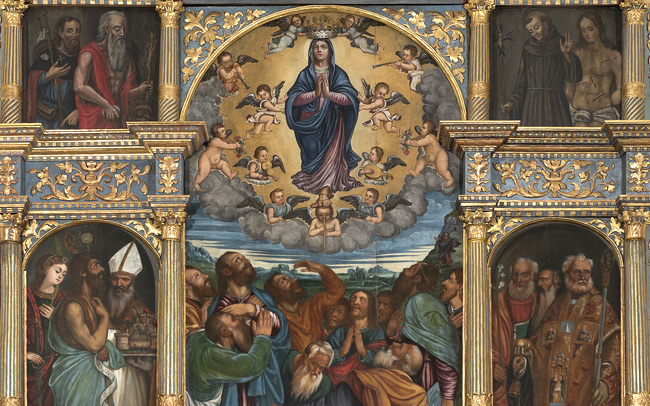 The Church of St. Mary in Pakljena on the island of Šipan is a single-nave stone structure with a rectangular apse, side chapel and sacristy. It was built in the 14th century along with the Benedictine monastery of St. Michael (Mihovil), and the present layout was achieved during the 16th century.

The polyptych by Kristofor Krile Antunović, the leading Dubrovnik painter in the second half of the 16th century, was preserved on the high altar. In 1529, Kristofor Antunović came to Dubrovnik from Ston, and was taught painting at the Dubrovnik workshop of the Venetian master Pietro di Giovanni. According to the contract from 1552 with commissioners Tomo Krivonosović and Tomo Stjepović Skoćibuh, Cristophorus Ragusinus committed to make a polyptych modelled on the one by Titian, located in the Church of St. Lazarus in Dubrovnik at the time, but after the earthquake it was transferred to the Cathedral of the Assumption of the Virgin Mary. Titian's work was so popular that local buyers decided to obtain a copy not only for Pakljena but also for the Franciscan church on the island of Badija near Korčula. The altar had to be made in two years, and the painter committed to bring it and assemble it in the church. The contract fee was 82 ducats, a considerable amount at the time. Though we do not know what the whole Titian’s polyptych looked like, it appears that the painter made some changes and used different iconographic solutions. Additions and modifications added at a later date, such as the saint figure added on the lateral paintings of the first story of the retable, can be observed.

The conservation and restoration of the Šipan polyptych made at the Croatian Conservation Institute is among the most complicated interventions on polychrome wooden objects. Due to the degree of damage and extremely bad condition of the wooden support on retable architecture and panels, parallel work was carried out at the Department for Polychrome Wooden Sculpture and the Department for Easel Painting to achieve a more complete approach as well as uniform procedures and used materials. The missing elements of architectural parts of the retable were reconstructed, weakened hinges and cracks in the wooden support were consolidated and fixed, and the overpaint was removed from the original painted layer. The consolidation of the worm-eaten and severely damaged wooden carrier proved to be the most challenging process. The wood was in such bad condition and completely pulverized, that it could no longer function as the support for the polyptych. Two side panels with saints on the first story and in the lunette with God the Father, an extremely complex process of transferring the painted layer to a new, specially prepared, wooden support was therefore carried out. The old, fixed cradling was replaced with a flexible one, allowing for control of changes in the wood with minor changes in relative humidity. Consolidation and reinforcement of the wooden board hinges, used to assemble the paintings, as well as the reconstruction of the missing parts of the preparation and painted layer were performed.

As part of the European Year of Cultural Heritage, conservation and restoration of the polyptych will be presented to a wide audience at the largest local Feast (festa) of Our Lady of Mount Carmel (July 16th) in the Church of St. Mary in Pakljena.