Kloštar Ivanić, Church of the Assumption of the Blessed Virgin Mary

During the European Year of Cultural Heritage, the work on the pulpit, a donation from Franjo Vlahović, a canon from Čazma, from 1761, will be completed. This will bring to an end the many years of conservation and restoration of the Baroque inventory of the Church of the Assumption of the Blessed Virgin in Kloštar Ivanić. 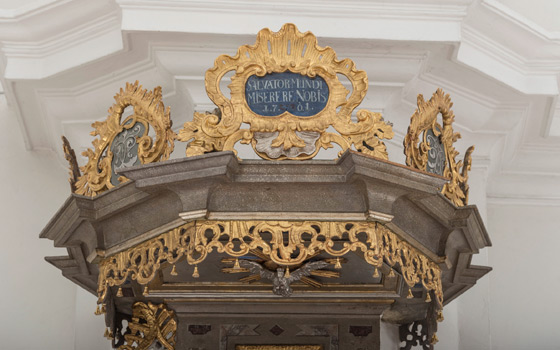 The Church of the Assumption of the Blessed Virgin Mary with a monastery in Kloštar Ivanić is an extremely important sacral complex in central Croatia with preserved Baroque inventory. Although the church was constructed in the 13th century, it was given a Baroque appearance in mid-18th century and expanded by adding two chapels and a new sacristy. At the time, three stylistically different sculpting workshops produced seven new altars. The church is full of rich wooden Baroque inventory. The high altar and the two lateral ones, dedicated to St. George and St. Joseph, the work of Antun Franjo Straub, are especially important. The corresponding altars of St. Barbara and the Epiphany, the work of an unknown author, constructed in 1762/1763, the painting depicting the Holy Sepulcher, one of the best-preserved paintings of this scale, and the a-tectonic altar of the Suffering Christ.

Since 1995, the Croatian Conservation Institute has been systematically carrying out conservation and restoration of the church inventory. During that period, the restoration of the high altar and sanctuary, altars of St. George and St. Joseph, altar of St. Barbara and the tabernacle, altar of the Suffering Christ, baptismal font and throne of Our Lady, and painting depicting the Holy Sepulcher was completed. Conservation was carried out on the altars of Seven Sorrows of the Blessed Virgin Mary and the Epiphany.

Part of the lavish church inventory in Kloštar Ivanić is the work of the Straub family workshop, a part of Tracing the Art of the Straub Family (TrArs) project. This international project is devoted to the study and presentation of artwork created by Straub family members during the 18th century in Germany, Austria, Slovenia and Croatia. The project is funded by the European Commission, the Ministry of Culture of the Republic of Croatia and the Bavarian State Ministry for Education, Science and the Arts. More information about this project can be found at the project website.