As the proud holder of the European Capital of Culture title for 2020, the City of Rijeka began with preparation of a series of projects aimed at cultural and overall advancement of the city. One of the projects is an exhibition by the Rijeka City Museum that will include the presentation of paintings by brothers Klimt and F. Matsch from the Croatian National Theatre in Rijeka. To ensure that the paintings are exhibited in optimal condition, Croatian Conservation Institute will dismount them and begin with conservation research. By 2020 complete conservation will be finished. 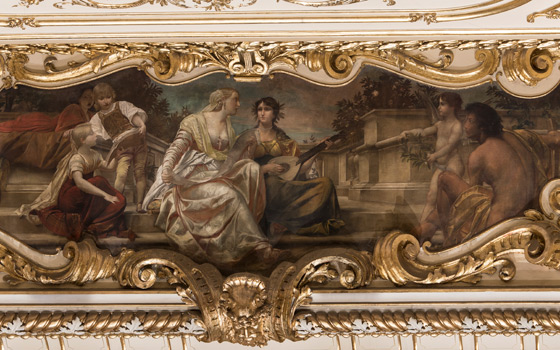 The research will include visible, IR and UV spectrum imaging, as well as oblique light and X-ray imaging, and, if necessary, laboratory analyses of pigments and binders. Symbolically, the start of conservation will be in 2018, the European Year of Cultural Heritage, and on the centennial anniversary of death of Gustav Klimt. By 2020, Croatian Conservation Institute will collect numerous new findings that will enrich the history of Rijeka, European Capital of Culture.

Gustav Klimt was one the most famous artists in the world. His professional and private life was thoroughly researched and described. However, the Croatian National Theatre Ivan Zajc in Rijeka holds an almost forgotten, modestly explored, but important part of Klimt’s oeuvre – its beginning. After completing his education at the Viennese School of Arts and Crafts in 1883, he formed, together with his two-year younger brother Ernst and an older friend Franz Matsch, an artist association Die Künstler – Compagnie. Immediately after the start of their collaboration with the architectural firm Fellner und Hellmer, specialised in constructing theatre buildings, they accepted the commission to create canvas paintings for the auditorium of the theatre in Rijeka. The paintings were painted in Vienna and, after a short exhibition in the Art History Museum, were transported and installed in Rijeka. Neue Freie Presse newspaper received the paintings very positively and wished “that the three esteemed artists should soon be commissioned to execute similar work in Vienna”. The largest painting, Theatre by Ernst Klimt, is positioned above the proscenium, while The Angles, attributed to Gustav Klimt, are located above the proscenium balconies. Above the auditorium, six medallions are arranged around a luxurious chandelier: Instrumental Music, Serious Opera and Poetry by Gustav Klimt, and Love Poetry, Dance and Comedy Opera by Franz Matsch.