During the European Year of Cultural Heritage, comprehensive conservation and restoration of the church and its furnishings will be presented. The work that had been carried out is an example of a complete project of the restoration of an ecclesiastical structure important for the City of Buzet, but also for the whole community. 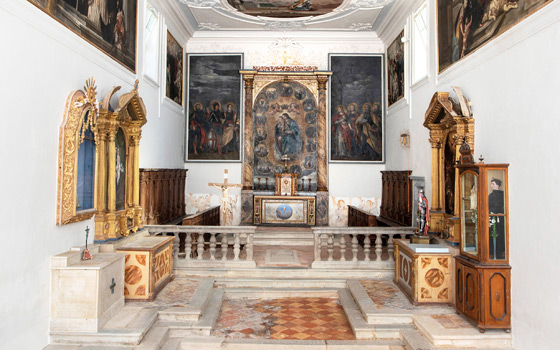 The Church of St. George is located in the northern part of the old center of Buzet, at its highest point. The simple longitudinal interior has an elevated apse. The present layout of the church was achieved between 1603 and 1611, when it was restored under the patronage of Captain Marco Antonio Erizzo. The entire interior is richly decorated with movable inventory during the 17th and 18th century. At the end of the 18th century, the church was rebuilt and raised with a new roof and vault, decorated with three painted medallions (by the painter Matto Furlanetto) and stucco.

Conservation of the numerous church paintings began in 2002, and was followed by comprehensive work in the interior of the church, carried out entirely by the Croatian Conservation Institute. Conservation and restoration, carried out in continuity until 2012, included all easel paintings from the church. The work began with the restoration of the six canvas paintings series with big dimensions, symmetrically placed on lateral walls of the church between the windows like a frieze, beneath the cornice. They are the work of a skillful Venetian master and were probably made when the church was reconstructed in the 18th century. Paintings of the miraculous resurrection and healing of St. Anthony of Padua were heavily damaged, and almost illegible because of the thick layer of impurities and opaque varnish as well as mechanical damage and old repairs. The altarpieces were in similar condition – Our Lady of the Rosary from the high altar and St. Eligius with St. Joseph and George from the side altar, and the paintings of St. Andrew, George and Lucy and St. Barbara, Apollonia, Simeon and Longinus, located on the left and right sides of the high altar.

The form of the high altar is balanced and creates one unit with the painted wall stucco, which concludes the cornice by simulating the attic. The altar itself is a simple, wooden, carved polychrome architectural retable set on the altar stone. The conservation and restoration methodology on the high altar, due to the state of the original painting, was primarily focused on protection, consolidation of the wooden support and polychromy, and minimal intervention on the painted layer.

In 2018, the high altar was assembled with the corresponding paintings, and four paintings of the Miracles of St. Anthony of Padua series, thus bringing the comprehensive work at the Church of St. George in Buzet, carried out by the Croatian Conservation Institute, to an end.

On Thursday, September 6, 2018, at 9 o’clock, the 49th Scientific Meeting "Buzetski dani 2018." will be held at Narodni dom in Buzet where eighteen historians, restorers, art historians and other experts will present the latest research related to the history, culture and art of the Buzet region. The main topic this year is the church of St. George with eight expert lectures. Board of the Chakavian Parliament Buzet is organizing the meeting with Augustin Vivoda Public Open University Buzet and the Croatian Conservation Institute.

The ceremony, which will mark the end of conservation and restoration in the church of St. George in Buzet, will take place in the heart of Old Town of Buzet at 17:00. The hosts of the ceremony are the City of Buzet, Parish of the Assumption of Mary and the Croatian Conservation Institute.