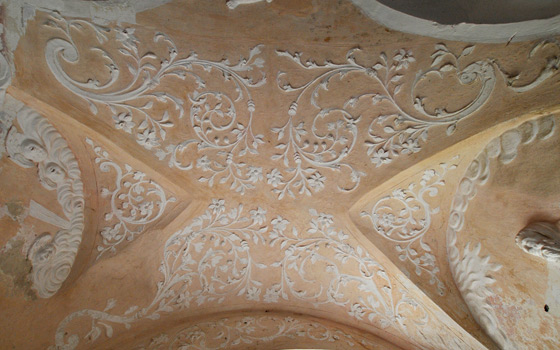 One of the most important monasteries of the entire Pauline Order, the Monastery of the Blessed Virgin Mary and the Church of the Immaculate Conception of the Blessed Virgin Mary in Lepoglava was founded by Herman II, Count of Celje, in 1400. During its turbulent past, the monastery was redesigned several times, with the most significant being the reconstruction in the Baroque style that began in 1650. After Joseph II issued a decree in 1786 that abolished Pauline monasteries, the monks left the Lepoglava monastery, and all their possessions were taken over by the Chapter in Čazma, later becoming state property. The monastery was then converted into a penitentiary, which it remained until 2000. The biggest devastation of the former Pauline complex occurred in 1945, when a huge amount of ammunition exploded while the German army was retreating. The entire west wing was completely destroyed, and an air blast wave severely damaged the structure of the old church. Reconstruction of the entire complex, along with conservation and restoration, started in 1946.

After the monastery was returned to the Diocese of Varaždin in 2001, conservation research and restoration began on the remains of Baroque wall paintings in the monastery's pharmacy. The paintings are the work of the famous Baroque painter Johann Baptist Ranger, one of the most important representatives of late Baroque in Croatia, and his workshop dating to 1747. Only fragments of wall paintings on the upper part of the walls have been preserved because the original vault of the pharmacy was demolished during one reconstruction. The iconographic images are linked with the use of the space as a pharmacy – Christ treating various illnesses is depicted on the eastern wall, while on the southern wall we have a memento mori scene Death on the Throne. Restoration included the removal of additionally applied layers of paint and plaster that completely covered the preserved wall paintings, and the reconstruction of plastered and painted layers. Although only fragments of wall paintings in the pharmacy have been preserved, they are an important contribution to the knowledge on Baroque wall painting in northern Croatia, as well as the newly discovered addition to the opus of Johann Baptist Ranger.

During 2016, the work on Baroque wall paintings started in the church choir (also the work of Johann Baptist Ranger) created from 1735 to 1737. The selected motifs on wall paintings (2.2 x 18 m) are inspired by the last book of the New Testament, the Book of Revelations or the Apocalypse, and are a part of the wider Baroque style in the church from the late 17th and early 18th century. The display of 24 elders and four creatures, worshiping the Savior in the form of a Lamb on a book with seven seals, extends over the south, west, and north wall of the choir above the painted backs of choir benches. Together with the gorgeous artwork on the walls of the shrine and the smaller paintings on the choir benches, it is the largest painting series of Christ by Johann Ranger. Because of extensive damage to the northwest part of the church roof, which occurred during the 1943 fire and the explosion of the ammunition train in 1945, the wall painting in the choir was severely damaged. Apart from mechanical damage, it was exposed to rain for many years. Thus, nearly half of the painting on the north wall have been completely destroyed, and strong moisture damage is also present on the painting on the south and west wall of the choir.

The stucco on the walls and part of the vault has been restored in the lobby of the church, which is one of the most interesting parts of the entire complex. Stucco floral decorations with figurative reliefs were created in 1718 and are attributed to the workshop of A. J. Quadri. Their execution is relatively shallow and "glued" to a monochrome red background. The characters are rigid, defined by hard contours, clothing is defined by linear lifeless carved folds, and heads and arms have a simple shape.

The stucco on the walls and vaults was in very poor condition, with a lot of mechanical damage, and some parts of the composition were missing, e.g. a saint’s figure on the eastern wall. These details disappeared a long time ago during one intervention, most likely between the two wars, and the missing decorative elements were painted with white paint on an ochre like substrate used to paint the lobby at the time.

During conservation and restoration of the former Pauline monastery and church carried out by the Croatian Conservation Institute, almost all the work on the inventory of the nave, shrine and chapels has been completed, as well as on the wall paintings in the sanctuary. After the work has finished, a large reconstruction of this extremely valuable monument of Croatian cultural heritage will be completed.