During the European Year of Cultural Heritage, Croatian Conservation Institute presents the completed conservation of floor mosaics of Roman baths on the island of Vis. 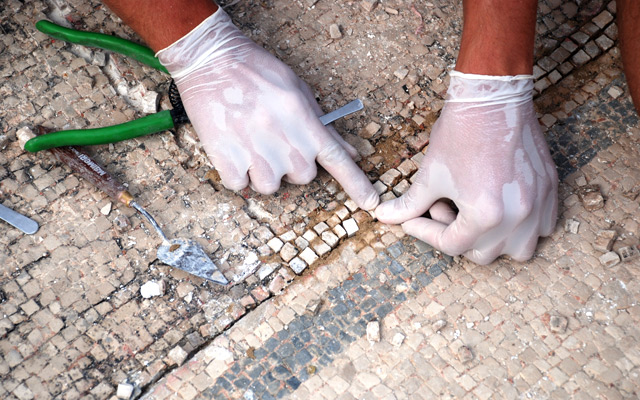 Roman baths in Vis were one of the most representative artifacts of civilization at the time. The complex had several construction phases. The phase from the turn of the 2nd century included the design of all mosaic floors and painted walls, which, with the architecture, created a complete artistic experience inherent to Roman tastes of the time.

Floor mosaics decorated most of the rooms in the thermal complex, showing the dominant Roman strength in the simplicity of geometric patterns as universal forms that can be found in the Roman Empire on the Mediterranean. Dolphins on one of the mosaics are proof of high standards in interior design solutions, which contribute to the compositional dynamics within the predominant geometric patterns.

The Vis mosaics are a unique art piece preserved in the original architectural framework. They are a reflection of very active mosaic workshops based on a strong Hellenistic tradition and increasing local creativity that incorporates the repertoire of Roman patterns of the 1st and 2nd centuries as the direct influence of the Salona mosaic school and workshop.

Once archaeological sites have been discovered and the layer hiding them removed, they become increasingly vulnerable and subject to erosion that can significantly reduce their original matrix. The Vis mosaics have been undergoing restoration by the Croatian Conservation Institute since 2000, trying to protect and take care of the original material in order to minimize the effects of exposure to the elements and the devastating effects of harmful processes. In addition to standard conservation and restoration procedures, more complex processes of lifting parts of the mosaic and returning them to the original base layer were used. The concept of conservation and protection of the Vis mosaics contributes to their presentation as the most representative part of cultural heritage.