During the European Year of Cultural Heritage, the results of the initial phase of the medieval topography of Gorjani project will be presented. 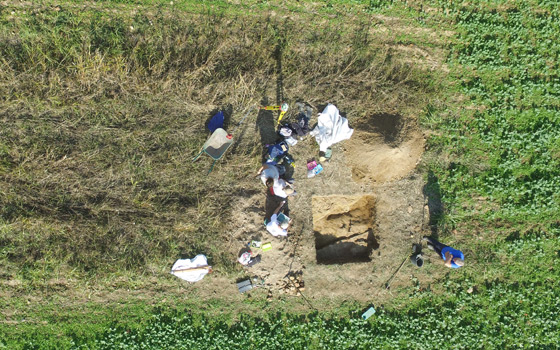 Medieval Gorjani, one of the most important centers of the Vukovar County in the Middle Ages, developed at the northern edge of the Đakovo plain and the lowlands of the Vuka River. The members of the Gorjanski family were among the most powerful ones of the Kingdom of Hungary in the second half of the 14th and the first half of the 15th century, and accordingly had higher authority. During that period, Gorjani became a large urban settlement with a parish church, Dominican monastery and a developed fortification system. After the destruction during the Ottoman Empire, as well as during the 18th and 19th century, the remains of Gara (the first mention of Gorjani) were used as construction material, and the area was excavated in search of valuable finds.

The fortified settlement covered an area of approximately 16 hectares, and it was surrounded by two streams. The fortification remains covered with vegetation can be seen in the configuration of the terrain, while the remains of a moat are clearly visible in the Glavnik position. During 2017, several locations were explored using ground penetrating radar, a thorough inspection of the area, aerial photography, and archaeological excavation. A modern cemetery, traces of fortifications, elements of a medieval settlement (fire pit, well), and a medieval church with a cemetery were all discovered.

During 2018, the implementation of the project, funded by the Ministry of Culture of the Republic of Croatia, will continue, with support of the Conservation Department in Osijek and the Municipality of Gorjani. Cooperation with the Archdiocese of Đakovo-Osijek and the Museum of Đakovo Region to is also planned.

The aim of the project is to determine the distinctiveness of a site with a preserved urban structure of a medieval settlement, which was not modified with later interventions. Studying and presenting the development of the settlement and its layout will greatly contribute to the knowledge on medieval Slavonia and bring it closer to the expert and general public.

The press conference to present the results of the initial phase of the project will be held on Thursday 27th September 2018 at 11 o'clock at Kulturni dom Lucija Karalić, Ritvara 8, Gorjani.