In the European Year of Cultural Heritage, Croatian Conservation Institute presents the results of historical research and documentation of Castle Dioš in Končanica. 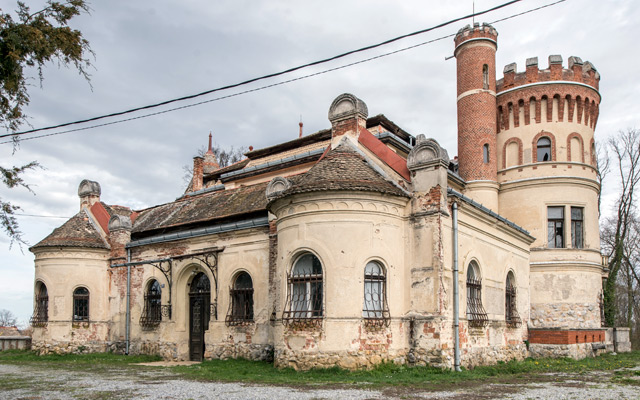 Castle Dioš is a rare example of Hungarian manor house from the beginning of the 20th century in Croatia. The manor house was built in 1904 in the Historicism style and enriched with elements of the Hungarian stylistic tendencies from the turn of the century. It was designed by Ernő Foerk and Gyula Sándy, architects and professors from Budapest. The castle was planned as the center of the estate and residence of Paula von Falkenberg, Princess of the German county of Wittgenstein-Sayn and widow of Alajos Tüköry, and their three children. Located on a plateau above the fishponds along the Ilova River, the architecture of the castle-like mansion blends seamlessly with the forested landscape of Končanica.

Castle Dioš is a detached building with a complex layout, elaborate architectural solutions, and an extremely sophisticated roof structure. The main residential part is composed of a two-story hall, connected both to the living area on the ground-floor and to the bedrooms on the upper floor. It also includes a two-story tower. The adjacent servants’ wing spreads to the west along the residential area. The castle is an example of technological achievements in construction from the beginning of the 20th century. Its architectural equipment, rich wall paintings, and stained glass in the central hall manifest the modern craftsmanship and Gesamtkunstwerk tendencies of the period.

During the European Year of Cultural Heritage, Croatian Conservation Institute has completed the interdisciplinary research and documentation of the existing state of Castle Dioš. These activities were carried out in accordance with the conventional methods of documenting cultural goods in order to valorize and define the guidelines for the final presentation, no matter the purpose or user of the castle in the future.