During the European Year of Cultural Heritage, Croatian Conservation Institute presents the results of research and conservation of the Church of St. George in Belec. 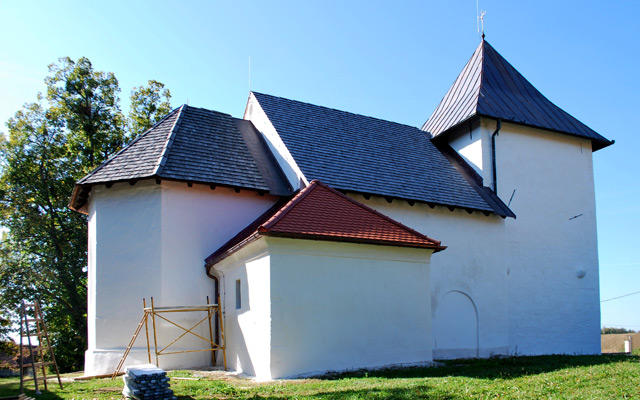 The Church of St. George in Belec is one of the few well preserved examples of medieval ecclesiastical architecture with several phases in continental Croatia: it combines a Romanesque bell tower, Gothic vaults and wall paintings in the interior, and a subsequently built Baroque sacristy. Properly orientated, the church is located on a slightly elevated plateau in the northern outskirts of Belec. It is a stone church built as a single-nave structure with a lower polygonal sanctuary and a massive bell tower erected on the axis of the west façade. The sacristy is located on the north side of the sanctuary, and there is a small porch in front of the south entrance to the nave. The shrine has the original Gothic cross-rib vault and lancet windows. The nave, which probably had a lintel and wooden ceiling panels, received a reticulated vault and the ground floor of the bell tower during the Gothic phase. Architectural stone elements in the arches were formed using geometric, floral and figurative motifs, and the most interesting are the consoles shaped like human heads. The pointed arch frame from the south entrance to the church with a painting depicting Mary in a lunette was also preserved. Originally, the interior of the church was painted, and fragments of wall paintings in the nave and the vault of the sanctuary that depict God the Father and the Virgin have been preserved to this day.

T. Stahuljak started the conservation of the church in 1946 and, with longer interruptions, they were continued until today. Since the 1980s, Croatian Conservation Institute has also been a part of the project, and took over the renovation in 2007. Conservation of the Church of St. George in Belec, one of the most enigmatic ecclesiastical structures in Zagorje according to Gjuro Szabo, was completed in the European Year of Cultural Heritage.