Križevci, Church of the Holy Cross

During the European Year of Cultural Heritage, Croatian Conservation Institute presents the results of the completed conservation and restoration of the altar of the Holy Cross from the church of the same patrocinium in Križevci. 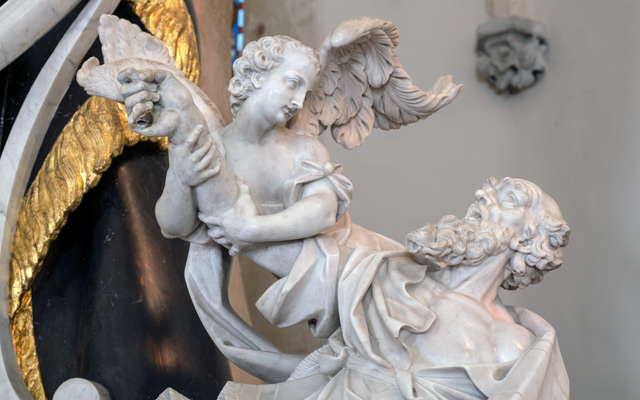 The altar of the Holy Cross, the last and one of the best works by the Italian Baroque sculptor Francesco Robba, was created in 1756 for the Cathedral of the Assumption of the Blessed Virgin Mary and St. Stephen and Ladislaus in Zagreb. After the earthquake in 1880, the altar was removed from Zagreb and moved to the Church of the Holy Cross in Križevci.

The atectonic type of altar, with comparative examples that date back to the first and second half of the 18th century (and can be found in the Central European region), is made combining several types of marble.

In 2016, Croatian Conservation Institute began restoring the altar which included conservation and restoration research (archival, historical and art research, laboratory analysis, photo documentation and architectural drawings of the existing state, preparing graphic documentation, i.e. mapping damage and contamination etc.), and the execution of preliminary conservation (e.g. cleaning test on stone sculptures on the altar). During 2017, the entire surface of stone sculptures and elements of the altar were cleaned mechanically and using distilled water, steam, and chemical agents. The missing forms and the gilded layer were also reconstructed and matched in tone to the original. The work on the wooden pelican sculpture on the top of the altar was also started and, at the end of the same year, the altar suppedaneum was dismantled and transported to the workshop to begin the process of extraction or stabilization of harmful water-soluble salts, as well as cleaning and putting it back together.

The conservation of the altar of the Holy Cross will be completed in 2019, when this valuable work by Francesco Robba, originally made for the cathedral in Zagreb, will be presented to the public.