It is with great pleasure that we invite you to the opening of the “Krk, church of St. Francis of Assisi, conservation of the Sacra conversazione altarpiece“ exhibition which will be held on 30th October 2018 at 19 o'clock at the Galerija Garbas in Rijeka, Užarska 26. 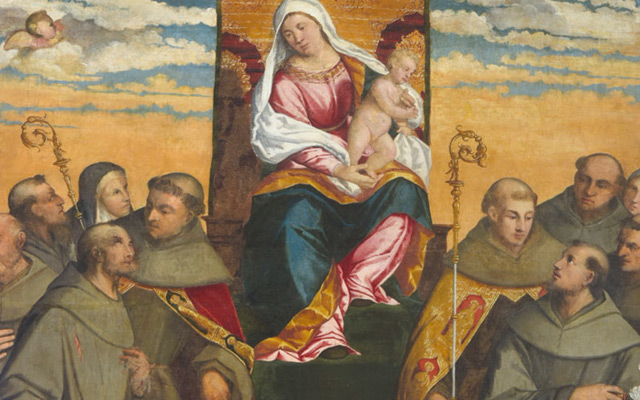 During the European Year of Cultural Heritage, Rijeka Department for Conservation of the Croatian Conservation Institute will present the results of the finished conservation and restoration of the Sacra conversazione painting attributed to the workshop of Bernardino Licinio from the high altar in the church of St. Francis of Assisi in the city of Krk.

Sacra conversazione painting (280 x 190 x 1.8 cm) from Krk is one of the largest Renaissance paintings on wood in Croatia. Historical and art analyses indicate it was created by the workshop of Bernardino Licinio, a painter from Bergamo active in Venice in the first half of the 16th century. Within his opus, the Krk painting from 1531, is one of three preserved large altarpieces painted on wood. The first was created in 1530 for the San Vito church in Ferrara, and the second is the famous Sacra conversazione from 1535, painted for the Santa Maria Gloriosa dei Frari church in Venice. The inscription at the bottom of the painting MDXXXI / SVPTIB. P.F.P. CRASSOVICH. DE. VEGLA confirms it was a donated in 1531 by the Krašović family from the city of Krk.

In the past, several interventions were carried out on the painting to repair and conceal damage. Even the format of the painting was reduced on two occasions by cutting off the edges. If we add four centuries of exposure to unsuitable microclimatic conditions to the above-mentioned interventions, it is clear that the painting was in very bad condition before conservation and restoration.

The work began in 2008 with extensive conservation and restoration research involving infrared and ultraviolet spectrum imaging and laboratory analysis. Due to the dimensions and location of the painting, it was the first time that computer radiography was performed in situ. Damage to the support system and weakened joints of the wooden support were observed on X-ray images, as well as parts of the original painted layer that had been painted over, and the inscription about the restoration in the bottom part of the painting. The cleaning of the painting was quite demanding due to a large number of interventions and layers of overpaint on the original painted layer. Recent layers of overpaint were removed and the older ones were preserved.  During carpentry repairs, plank joints were strengthened and cracks were mended. Cross supports were attached to the back of the painting with a screw system that allows the movement of wood and removes the risk of new cracks appearing. Retouching was carried out with gouache paint and finished with wood stains after varnish was applied, achieving a visual unity of the painted layer and completing the conservation and restoration process.

The painting will be returned to its original place on the high altar after the reconstruction of the church of St. Francis, and after the church has established appropriate microclimate conditions to preserve the artwork.