During the European Year of Cultural Heritage, the results of research of the archaeological site Sveti Martin na Muri will be presented. The exhibition opening and a lecture on the work that had been carried out will be held on Friday, 16th November 2018 at 18 o’clock in the Gallery above the Municipality office (Trg svetog Martina 7, Sveti Martin na Muri). 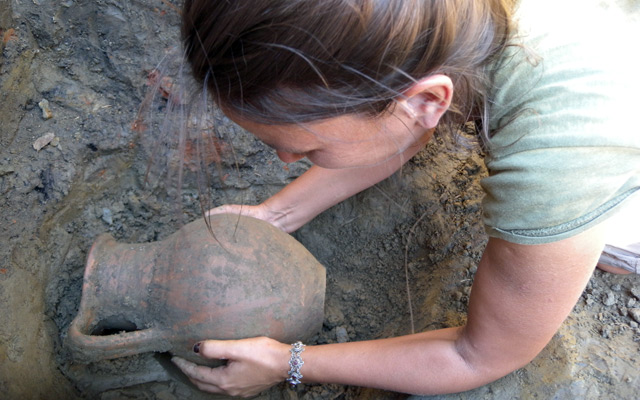 According to Antonine Itinerary, the ancient Halicanum or Alicanum, situated on the Poetovio-Carnuntum road, was most likely located in Sveti Martin na Muri. A tentative confirmation of this assumption is the finding of a sarcophagus with an inscription that mentions Julia Secundina and the Alicanum municipium.

Several archaeological excavations carried out in Sveti Martin na Muri in the 1970’s produced numerous finds. Since 2015, the Croatian Conservation Institute has been conducting exploratory excavations with the aim of determining the boundaries of the site, as well as those for the protection of cultural property. While prehistoric and medieval periods of habitation were confirmed on the site, the Roman period is the most interesting one. The importance of the site, most of which was destroyed when the current settlement was built, is evident from numerous artifacts that have been found. By comparing the results of previous excavations, the assumption is that the workshop section of the old Halicanum was situated in the present-day center of the settlement with the residential part more to the west. Most numerous are pottery finds, followed by metal and, to a lesser extent, glass, that can be dated from the 1st to the 4th century.

Through the excavation of this important Roman site and the analysis of collected data, it will be possible to reconstruct the life and customs of the Roman population that inhabited the area in present-day Međimurje. Given the fact that the Municipality of Sveti Martin na Muri unreservedly provides logistical and financial support to the project, there is no doubt that the research results will soon see the light of day.