During the European Year of Cultural Heritage, the results of the completed phase of conservation and restoration research of the cavalier of the Brod Fortress in Slavonski Brod will be presented. 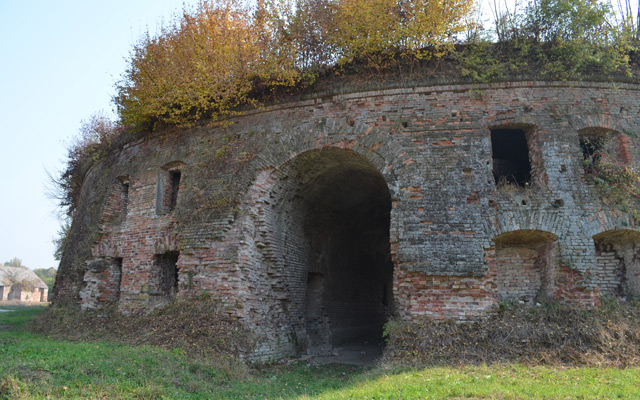 After the Treaty of Karlowitz in 1699, which set the border between the Habsburg Monarchy and the Ottoman Empire, settlements and fortifications along the border became particularly important. Since part of the border was on the Sava River, Slavonski Brod had an extremely important role in the strategic defense of the Empire because of a convenient crossing over the river. It established an important trade route with Bosnia and, indirectly, the entire Ottoman Empire. The construction of a new, modern fortress in Slavonski Brod began in 1715 based on the project by engineers Willer and Peretta, modeled on the fortifications of Vauban. The central part of the new fortress – a rectangular space with four bastions connected by curtain walls, three ravelins and Hornwerk with mandatory buildings for the military, warehouses, powder mill and other auxiliary facilities –was completed in 1720 when the garrison was moved from the old fortress. The archaic rectangular shape of the central area of the fortress caused a number of problems for the fortification architecture of the 18th century. These shortcomings were observed by Nikola Doxat de Demoret, who inspected the Brod fortress in 1726. It appears that his analysis of the condition of the fortress and its drawbacks, as well as constructive suggestions and solutions for their removal, had a crucial effect on the position and form of the cavalier. Its construction solved three important objections made by Demoret: the badly utilized central rectangular plateau, lack of space for the garrison and the magazine, and the necessity to increase the space with platforms for the cannons.

The cavalier of the Brod Fortress was built from 1766 to 1784 and is one of the most important preserved monuments of fortification architecture from the 18th century in Croatia. It is unique because of its sheer size, atypical position within the Fortress and a layout that enabled it to accommodate the army, weaponry, ammunition, various warehouses and workshops. In the urban sense, the wings of the cavalier enclose a large inner rectangular plateau where the chapel is located. The form of the interior façade with a series of prominent large casemate arches with a sequence of very similar façades makes it look like a town square. The vertical line of the clock tower, located above the central passage in the northern wing, in the axis of the ellipsoidal baroque chapel on the intersection of the horizontal and vertical axes of the central passages, and diagonal axes of the passage in the corners of the cavalier, is a reflection of the geometric urbanism of the Baroque style.

Although the cavalier is in ruins, except the restored southern part of the west wing, it is possible to plan its restoration and revitalization. Today, the city of Slavonski Brod is in charge of the fortress complex. The Croatian Conservation Institute was included in the work carried out in 2015 by conducting conservation and restoration research on the north part of the west wing of the cavalier, where the Tamburitza Museum would later be located. Cooperation between the City, Conservation Department and Croatian Conservation Institute continued in 2017 and 2018 with the work on the north wing of the cavalier. The research carried out has identified the construction phases and numerous modifications made during the 18th century, as well as interventions in the 19th and 20th century. Complete conservation documentation was prepared for future restoration projects.