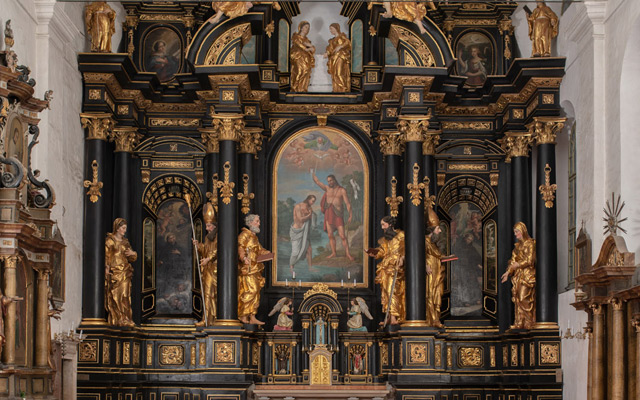 The altar of St. John the Baptist, along with the pulpit, is the oldest preserved element of furnishings of a Franciscan church in Varaždin. The work of Maribor masters, it was based on the design of K. Zettel, a Franciscan monk from Bavaria, transported to Varaždin and built in the shrine between 1699 and 1702. The sculptures are attributed to F.K. Reiss, a sculptor from Maribor. The paintings of Franciscans in lateral niches of the central zone, as well as two oval paintings in the attic, were painted in 1701 by I.G.L. Zirky. It was not until 1715 that the Zagreb painter J. Shidt painted the altar a walnut color and gilded the sculptures and decorative elements. The original altar painting was not preserved and the altar was thoroughly renovated in 1908. The work was conducted by J. Zorati, a gilder from Maribor, who also painted the entire altar.

The distinctiveness of the project is reflected in the fact that due to the size of the altar, the complexity and the condition of the retable architecture, the work included private restorers with whom very good co-operation and co-ordination was achieved, significantly shortening the deadlines for the restoration of the altar.