Croatian Conservation Institute presents the conservation and restoration carried out on the architecture of the main altar of St. Michael the Archangel from Velika Ludina, as well as current knowledge on Franjo Anton Straub’s opus. 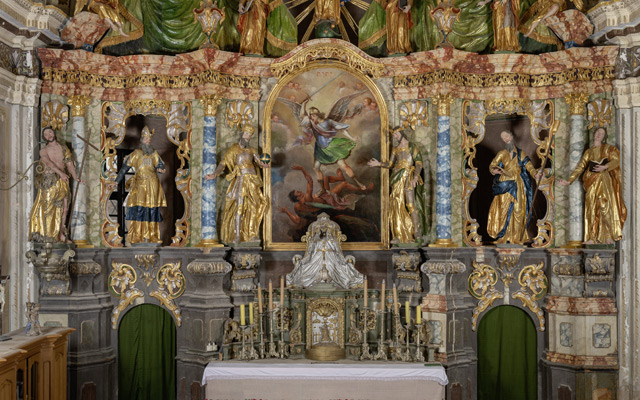 Church of St. Michael the Archangel in Velika Ludina is noted in canonical visitations from 1715 as a wooden chapel of St. Cross Parish, and in 1721 as an independent parish. The visitation of 1746 mentions the construction of a new church under the patronage of Count Erdödy, while a document from 1761 describes the new main altar, a work by Franjo Anton Straub, gilded and painted in 1765. The church and its wooden inventory was renovated in 1853, 1877, and 1906.

The altar of St. Michael is a two-storey retable that concludes the shrine. It sits on a high pedestal with semi-circular openings in the deambulatory above which are bright niches of the first storey with monumental sculptures of prophet St. Zechariah and St. Joachim. Sculptures of St. John the Baptist and St. John the Evangelist are located by the wall, while the central altar painting is flanked by sculptures of St. Stephen and St. Ladislaus. F.A. Straub introduced the motif of a curtain on the attic which opens from a dome-like baldachin to the central oculus. In front of the oculus is a sculpture of Immaculata surrounded by golden rays. The architecture of the marbled painted layer of the altar is decorated with gilded ornaments characteristic of the Straub Family workshop.

Croatian Conservation Institute has been responsible for the conservation of the altar of St. Michael since 2003. So far, the carpentry repairs of the altar’s static have been completed, as well as the restoration of the attic, all sculptures and ornamental elements, and some of the architecture on the first storey of the altar.

The artwork from Velika Ludina produced the Straub Family workshop, one of the most representative works of late Baroque sculpture in northwest Croatia, is part of the Tracing the Art of the Straub Family Project (TrArS). This international project is dedicated to the study and presentation of artworks created by members of the Straub Family during the 18th century in Germany, Austria, Slovenia, and Croatia. The project is funded by the European Commission, Ministry of Culture of the Republic of Croatia, and the Bavarian State Ministry of Education, Science and the Arts.

More information about this project