The ninth issue of Portal journal, annual scientific and professional publication of the Croatian Conservation Institute, features eleven papers that cover topics in cultural heritage protection. Eight of those are original scientific papers with one article from categories preliminary notification, review articles and professional paper. Ten articles were published in Croatian and one in English. Attached to the articles is a CD containing a catalogue of the Institute’s conservation work in 2017. 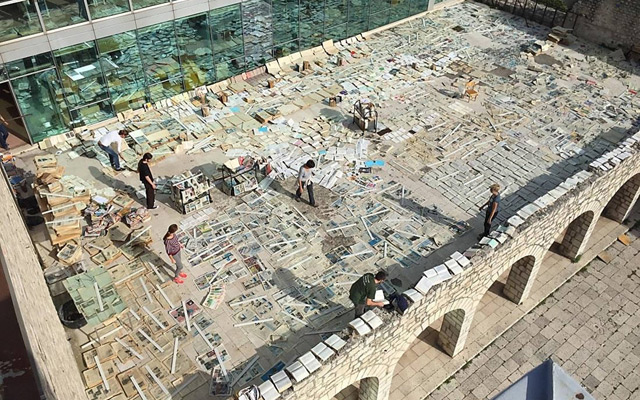 Helena Puhara and Ana Požar Piplica wrote about recent research carried out on the archaeological site on the Rat peninsula in Cavtat, where plaster fragments with wall paintings – red linear decorations on a light base - were discovered in the remains of an ancient structure from the 3rd century. Andrej Janeš’s article brings new insight on the previous appearance of the Abbey Church of the Blessed Virgin Mary in Topusko, based on archaeological and geophysical research carried out on the remains of the Cistercian Abbey. Nikolina Topić, Ines Krajcar Bronić and Andreja Sironić present the results of 14C dating of wooden foundation beams in the stone foundations of the atrium of the Rector’s Palace in Dubrovnik, dated from the 16th to the 19th century. Ivo Glavaš, Ana Karadole and Josip Pavić give information on the history of construction of the Barone Fortress which was initially erected at the beginning of the War of Candia as one in a series of temporary forts of the Šibenik’s fortifications, and later fortified becoming a fortress. Zlatko Uzelac, Margareta Turkalj Podmanicki and Valentina Slabinac wrote about the project presentation of Lower Town Gate, once known as Horn Gate, in the eastern part of Osijek Fortress. Irena Pauk Sili also conducted research on the Osijek Fortress, and presented previously unknown details about the building containing the military bakery and flour warehouse built in the mid-18th century in a strategically important position in the Supply Barracks. Mladen Perušić reveals the specificities of garden architecture in the Zagreb Botanical Garden of the Faculty of Science, history of the Botanical Garden and its gradual restoration. Sandra Šustić dealt with the work of Cvito Fisković in the field of research and valorisation of artwork in Dalmatia, with special emphasis on his role in the foundation and development of the first conservation workshop in Dalmatia. Ivana Car, Branka Lozo and Maja Strižić Jakovljević presented IFLA principles for the care and handling of damaged library materials after flooding. Nevena Krstulović, Ana Bielen, Domagoj Mudronja, Ivana Babić and Nikša Krstulović presented the results of the interdisciplinary research project PlasmaArt that examined the possibility of using cold atmospheric plasma jets in restoration of wooden objects. Ljubo Gamulin pointed to the necessity of applying ISO norms, FADGI and Metamorfoze guidelines for digitization of cultural heritage, comparing standardized procedures with existing inadequate and obsolete practices.

Read more about the ninth issue of Portal here.