Zagreb, Cathedral of the Assumption of the Blessed Virgin Mary and Saints Stephen and Ladislaus 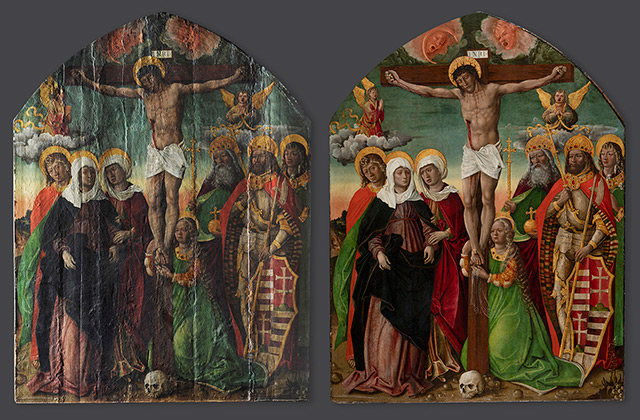 Conservation of the painting Crucifixion with the Holy Hungarian Rulers

The altar painting from the Zagreb Cathedral with the depiction of the crucified Christ and the holy Hungarian rulers stands out as an example of the once rich heritage from the 15th and 16th centuries in northern Croatia. The order for the painting is associated with the Bishop of Zagreb Luka de Szeged and dates back to the beginning of the 16th century. The altarpiece was intended for the altar of the Holy Cross located in a prominent place in the central part of the cathedral, in front of the former altar rail with the choir. It was painted using tempera and oil on wood, and based on its stylistic features, it was attributed to the Friulian painter Gianfrancesco da Tolmezzo. It is a rare example of state and religious iconography of the Kingdom of Hungary with the saints and St. John the Evangelist, the usual companions to the crucifixion of Christ, accompanied by holy Hungarian rulers: Stephen, patron of the cathedral, Stephen's son Emeric, prince of Slavonia, and, most prominently, Ladislaus, founder of the Zagreb diocese. King Ladislaus is depicted in knightly armour with a large shield, stylized in the form of the coat of arms of the Kingdom of Hungary, in the role of a fighter against the enemies of the faith. The intention to present holy Hungarian rulers as protectors and advocates of the diocese was clearly expressed.

Over the centuries, the altar was damaged, restored and relocated several times, and its turbulent history has significantly affected the condition of the painting. Mechanical damage and fractures are a result of several fires in the cathedral in the 17th century that caused the roof of the sanctuary to collapse. In mid-18th century, the wooden altar was replaced with a new one, and the altarpiece was placed on the wall of the sacristy. At the beginning of the 20th century, it was moved to the chapel of the Archbishop's Residence, and since 2007, it has been exhibited in the Museum Blessed Alojzije Stepinac on Kaptol in Zagreb. Adverse microclimatic conditions in the new, heated spaces accelerated the processes of drying and deformation of the wooden support and damage to the painted layer. Multiple restorations of the "severely damaged painting" are mentioned in sources from the first half of the 19th century, and conservation can be traced using systematic (photo) documentation from the beginning of the 20th century.

The condition of the painting with large structural damage to the wooden support required careful preparation of a complex conservation project carried out from 2013 to 2018 by the Division for Movable Heritage of the Croatian Conservation Institute. The first step was a detailed analysis of the material and history of the altarpiece. The method used to connect the wooden board was examined, types of wood were identified, and the condition was diagnosed. The analysis of colour microsamples identified the composition of pigments of the original painted layer, the number of layers and the composition of older repairs, copies and retouching. With the help of X-rays and the IR and UV imaging, numerous painting pentimenti were identified and zones with layers of overpaint, repairs and changes were more precisely located.

During past interventions, various reinforcements were mounted on the back of the painting, but they resulted in new damage and cracks to the fragile wooden board. After their removal, the work on strengthening the wooden support was unified by making a new, elastic type of reinforcement to the back of the altarpiece.

Layers of overpaint, altered restoration retouching and unstable putty from the front of the painting were also removed. Major damage (lacunae) were reconstructed with mimetic retouching that mimics the surrounding colour and texture of the preserved original. Reintegration with transparent colour tones was performed on minor mechanical and chemical damage that thinned or destroyed the final coatings of the painted layer.

After the work was completed, the painting was placed in a specially constructed display case to mitigate sudden microclimatic changes and prevent the occurrence of new damage to the painting. Measurements and long-term monitoring of microclimatic conditions are being carried out at several selected locations in the cathedral complex in order to make a decision on the most suitable place for the permanent location of the painting.