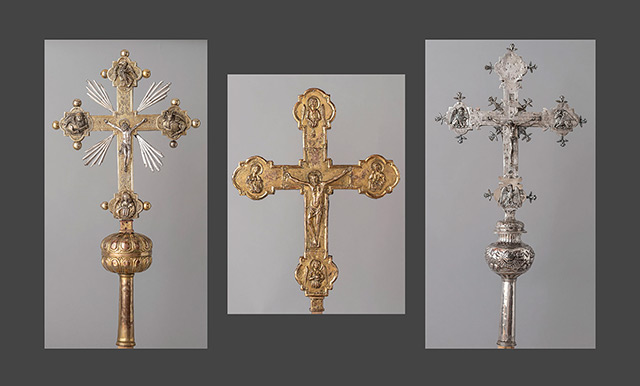 In 2018, the experts from the Zadar Department for Conservation of the Croatian Conservation Institute began conservation of three processional crosses (crucifixes) from Rovinj and Motovun, dated from the 15th to the 17th century. Although the leone in moleca stamp (used by Venetian authorities to confirm the quality of the product) was only found on the crucifix from Rovinj from the 16th century, based on their stylistic features and method of production it can be presumed that all three were made in Venice.

The crucifix from the church of St. Stephen in Motovun, made out of gilded copper sheet, was dated in the 15th century because of its characteristic Gothic silhouette with arms with trilobed ends and spikes. On the obverse of the crucifix there is ​​a depiction of the crucified Christ with the mourning Virgin Mary and St. John, and angels with an incense burner and a sphere are depicted at the ends of the vertical crossbar. The depiction of Maiestas domini on the reverse of the cross is surrounded by the symbols of the evangelists in trilobed tips.

Crucifixes from the parish church of St. George and St. Euphemia in Rovinj are from the 16th and 17th centuries. They were made out of gilded silver sheet decorated with casting, engraving and chiselling. Crucified Christ surrounded by the symbols of the Evangelists at the tops of the arms is depicted on the obverse of both crucifixes, with St. Michael and St. Catherine of Alexandria in high relief on the reverse.

Cleaning tests were performed after the condition of the crosses was documented, along with photographs taken under visible light and X-rays images. Next, metal elements and surface were separated from the wooden core by gradually inserting flat lifting tools and pulling out the iron nails. The surface of the crucifixes from Rovinj was treated with mild chemicals, and the Motovun crucifix was only cleaned mechanically with polishing tools and wooden sticks under a stereo magnifier due to the unstable gilding. During the cleaning phase, in addition to surface impurities, materials added in previous interventions that degraded the whole were also removed.

A large amount of lead-tin solder was removed by gently heating and brushing the surface to obtain visual uniqueness of the whole crucifix. This was followed by straightening the dents and distortions with a specialized tool for shaping metal sheets of various profiles. Reconstruction of the edge of the surface, meticulously following the metrics of details versus the whole, completed the appearance of the crucifix. This process enabled the drafting of a plan for a new wooden base, an important structural element, since it needed to be replaced because it was deteriorated. The missing side decorations on the smaller Rovinj crucifix, the central palmette of the larger Rovinj crucifix and the decorative side strip were cast based on the original parts that had been preserved. Other missing parts were made by hammering a silver-plated copper sheet of appropriate thickness with metal stamps made based on the original pattern. The individual parts were then assembled into a whole. Minimal retouching and surface protection were also applied.

The methodology of the work on the crucifixes completed in 2020 derives from the knowledge of materials and technology of making originals. Using exclusively hand-shaped materials identical to the originals, conservation continues the best tradition of sacral goldsmithing along with modern methods of documentation and research thus enabling the presentation of liturgical equipment in its original beauty.