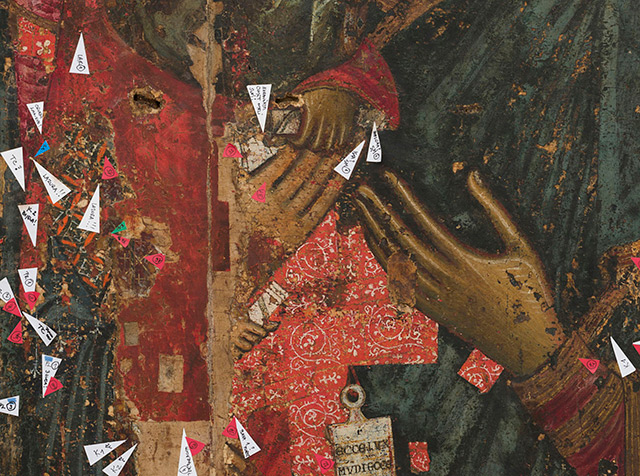 During the 13th century, a number of churches in Split were equipped with altars with panel paintings, and only six have been preserved to this day. Our Lady of Žnjan stands out in this group as the oldest and probably the most enigmatic Croatian icon. It was discovered by Cvito Fisković in 1964, covered with overpainting, redesigned and it was almost impossible do see what was painted (and built into a wooden retable from the end of the 17th century). He presented it to the public after an extensive restoration carried out by Filip Dobrošević from 1964 to 1967, attributing it to the so-called Split school of painting. After the work was completed, the icon was placed in the Treasury of the Split Cathedral. During the restoration, previous painting layers were identified, which were recorded by X-ray, and large probes were opened to present them.

Multidisciplinary work on the Our Lady of Žnjan icon began in 2018 at the Split Department for Conservation of the Croatian Conservation Institute: from historical and archival research (especially research on sources on the church of St. Mary in Žnjan), palaeographic analysis and conservation, to chemical and physical analytical maps of layers and grouping traces which made it possible to differentiate between individual layers (from the portrayal as the Virgin Hodegetria, i.e. Our Lady of the Good Way, to the transformation into the Glykophilousa Virgin, i.e. Virgin of Compassion).

During two years of working under a microscope and several types of light, thick layers of wax and retouching and varnish from 1967 were removed, as well as the remains of overpaint from the 18th and 19th centuries. After studying the surface with micro-optics and mapping the layers based on the existing damage, multitechnical analyses were performed. Thirteen points were selected for micro-sections to perform microscopic analyses of properties and identification of pigments by XRF, SEM/EDS, PIXE and micro Raman spectroscopy, followed by XRF analysis. The results of the analysis made it possible to confirm the order and properties of all historical layers on the icon, identify complete historical phases, diagnose the types of preparations and binders, and determine the palette of pigments.

Special attention was paid to dating the key element of each layer. Dating of the first layer to the 12th century was confirmed by carbon dating the lead-white pigment and properties were determined using micro ATR-FTIR-FPA diagnostics. Dating of the second layer to the end of the 13th century was confirmed through paleographic analysis and analysing the age of the canvas. The structure, elemental composition and binder of chrysography of this layer, performed with gilded tin foil, were determined using micro XRD, nano CT and FTIR. The third, youngest layer was dated to the 15th century analysing the age of the wooden board to which previous depictions were transferred.

All the results of the analyses were combined based on historical phases of the icon, and interpreted and presented with virtual reconstructions. This type of comprehensive, interdisciplinary analysis enabled the presentation of each layer of Our Lady of Žnjan icon. Understanding its genesis has opened up a whole new perspective on the interweaving of painting influences within the Mediterranean basin, which we are yet to discover.