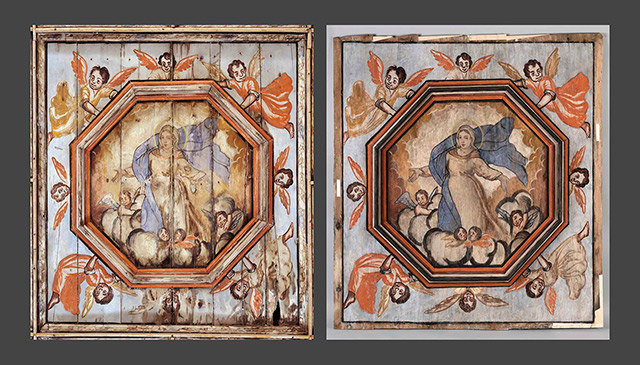 The Church of St. Mary of the Rocks is located northeast from Beram on an elevation near the cemetery. It was built in the first half of the 15th century as a single nave building with a rectangular sanctuary. The church is known for the best-preserved series of wall paintings in Istria. Depictions with lively colours, motifs, and compositions (scenes from the Mariological and Christological cycle, saints, Dance of the Dead, The Original Sin, Wheel of Fortune and Adoration of the Magi) were painted in 1474 by painters from the workshop of Master Vincent from Kastav. Dance of the Dead is the only depiction of this type in Croatia.

The painted wooden ceiling above the nave was constructed during the extensive Baroque renovation in 1709. At the time, a new marble altar, the work of Mihovil Ladavac and Franjo Golop, was also built in the sanctuary, and the cross-ribbed vault in the sanctuary was demolished and replaced with a ceiling. A bell gable was built and an open porch was added.

The painted ceiling (56 m2) covers the entire nave of the church with 63 painted square cassettes, and the central one is four times larger than the others. The cassettes have an outer square field and an inner one framed by an octagonal moulded frame. The depiction of the Assumption of the Holy Virgin Mary is painted in the octagonal field of the central cassette. The rest of the smaller cassettes have a sculpted and gilded passion flower applique (the flower of Christ, Passiflora), and the corners are decorated with floral Christian symbols (roses, tulips, chrysanthemums, carnations, daffodils, pears, figs, oranges, apples, cucumbers, squashes, peaches, plums, grapes, dates, quinces, mulberries, and pomegranates). Cassette corners next to the sides of the central one are decorated with cherubs. The painting technique and concept suggest that the same author painted the wooden ceiling of the cemetery Church of St. Peter and Paul in Trviž from 1703.

The analysis of the wooden support confirmed that the supporting beams of the roof were made using oak, while the planks of the painted ceiling were made out of fir. Inspection of the ceiling showed that the wooden support was damaged due to humidity and wood-eating insects, while the painted surface was pulverized and flaking due to the deterioration of the binder. Porosity and poor adherence of the painted layer to the surface did not allow the removal of surface impurities and tannin stains with a liquid medium on cotton swabs. Instead, a water-based solid gel was used. After the surface was cleaned, the painted layer was consolidated and fixed to the support using synthetic resin dissolved in a mineral solvent. Ceiling planks were reinforced by saturating the wooden support with a consolidator dissolved in a mineral solvent, nails were replaced with wooden pegs, and the construction was strengthened by inserting new wooden elements. Retouching of the painted layer was limited to connecting smaller damaged areas and breaks in form where there was a need for restoring visual integrity.

The first half of the ceiling (from the main entrance to the centre of the nave) was disassembled in 2016, and the work was completed in 2018 when the restored cassettes were once again returned to their original positions. That same year, the second part of the ceiling was removed, and the opening to the roof was closed with boards with a photograph of the painted ceiling. When the restored cassettes were mounted in their original position on the second half of the ceiling (from the middle of the nave to the sanctuary) in 2020, one of the phases of the complete renovation of the church of St. Mary of the Rocks was finished.

The completed work on the church is the result of a cooperation between the Directorate for the Protection of Cultural Heritage of the Ministry of Culture and Media and the Croatian Conservation Institute to organise, finance and perform demanding conservation on selected cultural goods of special importance for heritage of the Republic of Croatia.